Greenville, S.C. – November 13, 2014 – SYNNEX Share the Magic, a charity fundraiser created by SYNNEX Corporation (NYSE: SNX), announced today that it has raised more than $1.284 million for children in need, with nearly $810,000 to be distributed among four Upstate children’s charities. Beneficiaries of SYNNEX Share the Magic include: A Child’s Haven, Clement’s Kindness, Make-A-Wish South Carolina and Pendleton Place for Children and Families.

Founded in 2011 by Peter Larocque, President, North America Distribution for SYNNEX Corporation, $500,000 was raised in its first year alone. In 2012, $750,000 was raised and in 2013, $1.065 million was raised with more than $700,000 distributed to the four beneficiaries. Over the last four years, SYNNEX Share the Magic has collectively raised more than $3.59 million for Upstate children and distributed more than $2.3 million to its beneficiaries. While the amount of funds raised is significant, the impact it has on the lives of Upstate children and their families is truly immeasurable. 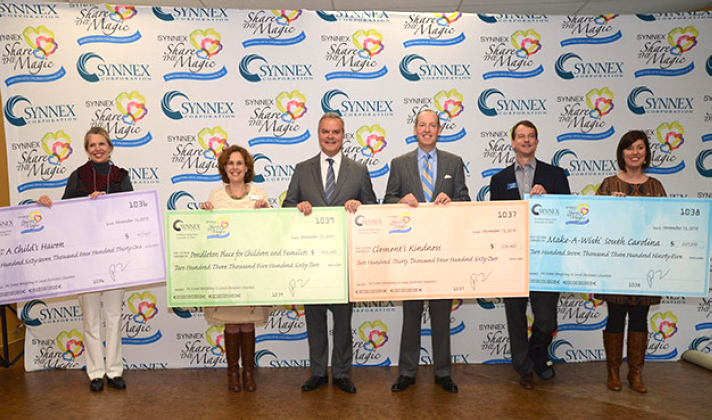 “On behalf of SYNNEX Corporation, we are proud of the SYNNEX associates and business partners, along with the local organizations and individuals, who united in the spirit of charitable giving to make a significant impact through these four well-deserving organizations,” said Peter Larocque, President North America Distribution, SYNNEX Corporation. “We look forward to continuing our work to make a difference in the lives of our community’s children in need.”

SYNNEX Share the Magic is a year-long initiative that raises funds through several community events throughout the year and culminates with an evening gala each October featuring nationally-acclaimed entertainment and high-dollar silent and live auction items. This year’s entertainment was provided by Cheap Trick. For the gala, SYNNEX brings their vendor partners, customers, and the Upstate community together for an inspiring evening to raise money for those in need.

With the help of SYNNEX Share the Magic, Make-A-Wish South Carolina has been able to grant more than 38 wishes for children who are battling for their lives. More wishes were granted in 2014 than any other year in the history of the South Carolina chapter. By having one of their biggest dreams come true, these children and their families are able to take the focus off of being sick and experience joy in their lives.

A Child’s Haven has been able to create a new Parent Support Center, expand their Parenting and Home Visitation program, and complete fundraising for their new facility that will allow them to serve more young children who are developmentally or emotionally delayed.

Clement’s Kindness has given over $215,000 in direct assistance to families of children with cancer, pledged $300,000 to fund an infirmary at Camp Courage, and made significant upgrades to the Infusion Center at the BI-LO Charities Children’s Cancer Center.

Pendleton Place for Children and Families has provided help for 285 abused and neglected children over the last three years. They have also been able to start three new programs that have dramatically impacted foster care in Greenville and how children who are victims of domestic violence receive care.

Next year’s SYNNEX Share the Magic Gala will be held on Saturday, October 3 at the TD Convention Center. The goal in 2015 is even higher so that collectively, SYNNEX and the community, can come together to create even more impact to those who need the most.

For more information on SYNNEX Share the Magic, visit www.SYNNEXShareTheMagic.com.

SYNNEX Share the Magic is a component fund of The Community Foundation of Greenville, a 501(c)3 organization.