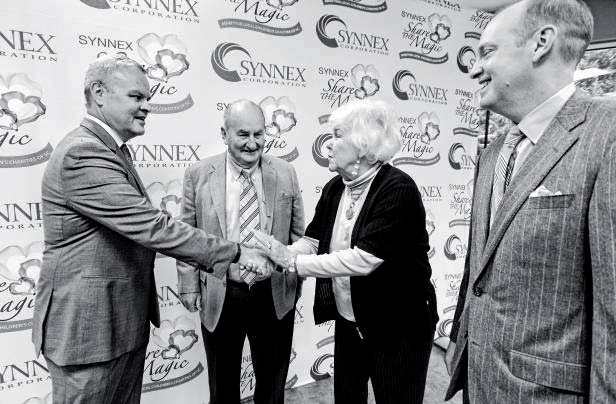 In recent weeks Greenville residents have seen the extraordinary benefits that flow from three charities that have their roots in this community, reflect the generous instincts of corporate citizens and contribute greatly to local agencies that do good work right here at home. The financial assistance that came to local groups last month through these three foundations or fundraising initiatives provides a powerful illustration of the ability of individual corporate leaders and the companies they lead to do good in a community and make a difference in many lives.

Hollingsworth Funds, Bi-Lo Holdings Foundation and SYNNEX Share the Magic recently announced their distribution of charitable funds in the Greenville area. These are by no means all of the private and corporate foundations and fundraising efforts that each year make such an improvement in our area and help so many people. From small civic clubs to larger efforts sponsored by major companies or foundations, many more millions of dollars are raised and distributed each year in our area.

Hollingsworth Funds gave more than $6.6 million locally in grants last month, and as a result 52 nonprofit organizations, along with Furman University and the YMCA of Greenville, will be better able to fulfill their missions. The total disbursed this year— $6,646,980 — exceeded last year’s total by 7.9 percent, and it is the largest annual gift in the organization’s history, according to a Greenville News story by Angelia Davis.

Grant recipients ranged from Allen Temple Community Economic Development Corporation to Urban League of the Upstate, from Compass of Carolina to Triune Mercy Center, from Homes of Hope to Project Host.

Hollingsworth Funds grew out of one of the most extraordinary gifts in Greenville’s history —one that came from the estate of the late textile industrialist John D. Hollingsworth. Within days of his death in late December 2000, it became known that Hollingsworth had shown his love for Greenville with a breathtaking gift to Furman, the YMCA and other local charities.  He was an eccentric and extremely private man who had immense wealth and had built a vast business empire that included considerable holdings of land.

The first year after Hollingsworth’s death, the Fund distributed $415,000, and by now the total has climbed to $48 million. In a statement, Ed Good, chairman of the Hollingsworth Funds Board, said, “We are committed to strengthening our community by funding highly effective organizations that bring positive change for Greenville.”

Asecond major charitable announcement last month came from Bi-Lo Holdings Foundation that it had donated $253,000 to 16 Greenville nonprofit organizations. Those agencies include:

Angelia Davis of The Greenville News reported the foundation, along with BI-LO stores, awarded the grants to organizations with missions to alleviate hunger and address hunger-related health or education issues. Many people in this area are familiar with the generosity associated with Bi-Lo and Bi-Lo Charities. It’s encouraging to see the good work continued through The Bi-Lo Holdings Foundation, which is a 501(c)(3) organization that supports many of the charitable-giving efforts of the new parent company of Bi-Lo and Winn-Dixie supermarkets.

In another major announcement recently, SYNNEX Share the Magic reported it had raised more than $1.28 million for children in need. This fundraising effort was founded in 2011 by Peter Larocque, president of North America Distribution, SYNNEX, which is based in  Greenville.

The SYNNEX fundraiser works throughout the year to raise money through several events that close out each year with an evening gala that includes high-profile entertainment as well as high-dollar silent and live auction items. The initiative supports the work of Make-A-Wish South Carolina, A Child’s Haven, Clement’s Kindness and Pendleton Place for Children & Families.

This is a season when many people are more inclined to give and reflect on the blessings in their own lives. The three announcements last month by Hollingsworth Funds, Bi-Lo Holdings Foundation and SYNNEX Share the Magic perhaps can inspire other corporations and their leaders to consider the legacy they can leave by helping the less fortunate people in our area.

SYNNEX Share the Magic is a component fund of The Community Foundation of Greenville, a 501(c)3 organization.